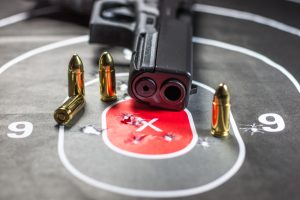 The National Shooting Sports Foundation (NSSF) states that 19 million plus Americans safely invest their time in target practice. They use handguns, shotguns and rifles. Some of this is for fun and much of it is for competitive shooting. Practice makes perfect.

There are three general categories for most competitive shotgun shooting events. All three involve throwing clay targets, but it is how they are thrown that differentiates these shooting events. Those are:

Skeet shooting — Clay targets fired from opposite directions and cross, which helps the shooter to develop or show off profile shooting skills.

Trap shooting — Clay targets are thrown in the same direction as the shooter is facing, but their trajectory varies, giving the shooter a more difficult set of targets. This type of shooting develops skills that involve instant decision making when choosing multiple targets.

Sporting clay shooting — One could easily describe this as mayhem. The clay targets are pitched from different heights, speeds and angles. Most targets move fast, and the goal is to simulate what a hunter would face in the wild with birds and small game.

Cowboy action shooting — The primary requirement for these types of shooting events is that the guns used are from the era of the American cowboy. That typically means from the 1800s. These are perfect events to get a look at antique guns and weaponry.

Bullseye shooting — While this can occur with the use of rifles, it is mostly a long-distance event for pistol shooters. By long distance, we mean upwards of 50 yards. Competitions are usually a mix of slow-firing and rapid-firing contests. To increase the difficulty level, a timer might be used and participants might also be required to fire using a single-hand rather than a double-hand grip.

International Defensive Pistol Association (IDPA) shooting events — This is an action shooting event that focuses on international rules and guns. This shooting competition focuses on self-defense type shooting situations, and the events mimic real life as much as possible. Its sister competition is the United States Practical Shooting Organization (USPSA), which is the U.S. version.

Silhouette shooting — This is a rifle event and primarily uses small gauge rifles such as .22s. These events stage small steel targets at varying distances between 50-100 yards. Targets may be at different heights, angles, and may move. There are competitions that employ high power rifles with targets in the 1000-yard range. To increase the difficulty of these events, shots might be timed.

Bench rest shooting — This is the most precise shooting competition for rifles available. The rifle sits on a front and rear rest and the rest sits on a table, thus the name. Shooters take aim at paper targets. The rifles used are highly modified or customized to provide the most stable shot possible. A lot goes into the trajectory of a bullet as even the wind can shift its path slightly. These competitions can be decided by a fraction of a millimeter. This is the type of event that is deeply rooted in tradition and can be seen at both the winter and summer Olympics.

Shooting events are widely available and they might be hosted by a local gun club or as a world competition at a venue such as the Olympics. What is the next step for people who are interested in shooting competitions? The biggest decision that you face is determining which style of gun — shotgun, pistol or rifle — that you favor. When the breadth of a hair can spell winner or loser, precision counts.